Line Of Duty: That Fleming And Pilkington Cliffhanger Might Have Actually Been Solved Already

Line Of Duty aired its most shocking cliffhanger ever on Sunday night, as DI Kate Fleming’s life hung in the balance at the hands of corrupt police officer Ryan Pilkington.

The pair had a tense armed stand-off at the end of the latest episode, after DCI Jo Davidson was instructed to “get rid” of Vicky McClure’s character by someone high up in the organised crime group. 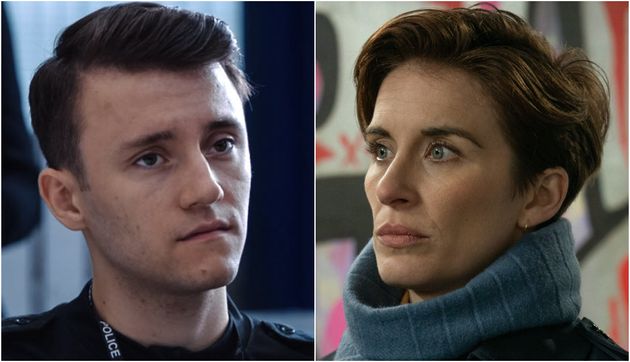 After Davidson lured her into a trap, Pilkington pulled out a gun and prepared to shoot Fleming, who quickly pulled her own weapon out on him.

Just before the credits rolled, two gunshots rang out, leaving viewers with an agonising week’s wait to find out who has been shot and whether they survive.

However, it looks like the answer to that question could actually be hidden in the official BBC trailer for series six, which debuted earlier this year.

In a scene that is yet to air in the series, Davidson is seen wearing the same clothes in the same setting as this episode, as she insists: “Kate, I had nothing to do with it.”

Fleming is also seen standing opposite her in the clip.

Could this be proof Fleming survives? Or is it just taken from a scene that has since been left on the cutting room floor? Perhaps a even red herring that’s been deliberately placed in the trailer to make us think exactly this?! After all, we'd put nothing past those sneaky Line Of Duty bosses.

It is still plausible that Fleming could be killed off, as the show’s creator Jed Mercurio has history when it comes to bumping off major characters.

Before the series began, he warned that no one was safe, saying: “Everybody knows that we’re serving something bigger than ourselves which is Line Of Duty.

“I know it would be a sad day, but all the main cast realise it’s possible. We’re mates, we talk about it, we joke about it, it’s something no one would relish but everyone would understand.”

The series trailer did also warn us that “lies cost lives”...

Meanwhile, it’s looking like the game is also up for Davidson too.

We already know that AC-12 are racing to the scene of the stand-off, having been supplied an address by a suspicious Fleming as she arrived.

But another shot from the series trailer shows Davidson holding her hands up as lights flash around her at the scene.

Now that we also know she’s related to former OCG boss Tommy Hunter, there’s surely no way she’s going to be able to talk herself around her links to organised crime, right?

Line Of Duty continues on Sunday at 9pm on BBC One.